At what would normally be a festive meal at a Rabbi’s home, I met a young man who was born with sight and was blind, blinded in a way that only the miracle of the development of artificial eyes could restore his sight. Much of the conversation at the table concerned music, and it was clear that the young man loved music in all its variety. But he said using CD’s was too difficult for him, and he greatly regretted the closing of the local classical music station. Use of a computer for finding streaming music on the web was also beyond his abilities. So much of the time he was simply alone, listening to the audio of TV broadcasts. I wanted to add him to my list of people to help. But after he left the table before desert was served, the Rabbi’s wife warned me not to plan on making regular visits to his small apartment alone, because he is currently schizophrenic.

Some 40 years ago, while I was a senior architectural acoustical consultant at Bolt Beranek and Newman, BBN developed something named (approximately) The Audio Analgesia. It was a device that played a mixture of soothing noise and music in a controlled manner to help dentists alleviate pain. It was a success for its particular application, but injected pain-removers have gotten safer and more effective since then, and dental work can now be relatively painless, not requiring this type of device. But good music has been proven as a therapeutic item in the psychiatric kit of tools, and I think there would be a good market for an updated version of this device. Possibly, a thousand selections should be stored in memory, play lists made up with the advice of experts on mental illness to suite the different manifestations, music available at the touch of a button, and the device re-programmable.

The idea seems reasonable to rabbis I have talked to in the days since that meal.

My mother suffered from severe Alzheimer’s disease some years before she actually died.  On her 90th birthday, I and my siblings visited Mom for a birthday celebration.  She sat at the table in the nursing home, completely unresponsive, with cake and ice cream in front of her.  Before we left, we sang “Happy Birthday” to her.  When the singing started, Mom perked up, smiled and sang with us.  She had played piano and always loved music and, even in this advanced Alzheimer’s state, she could still sing. From this experience, I can verify that David Klepper’s concept posted here has very real healing potential.

Two related papers by David Klepper are also posted on this website:

“An Autobiographical Assessment of the Importance of the Early-to-Reverberant Sound-Energy Ratio, “Clarity,” in Speech Acoustics”, by David Klepper, may be found here.

“The Early-To-Reverberant Sound-Energy Ratio In Concert Hall Acoustics”, by David Klepper, may be found here. 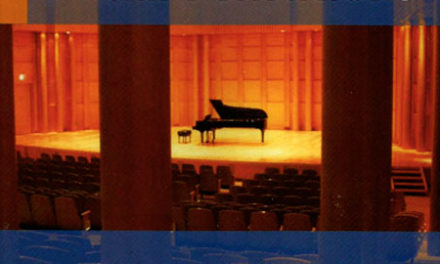 Auditory and Visual Sensations by Yoichi Ando – a Book Review