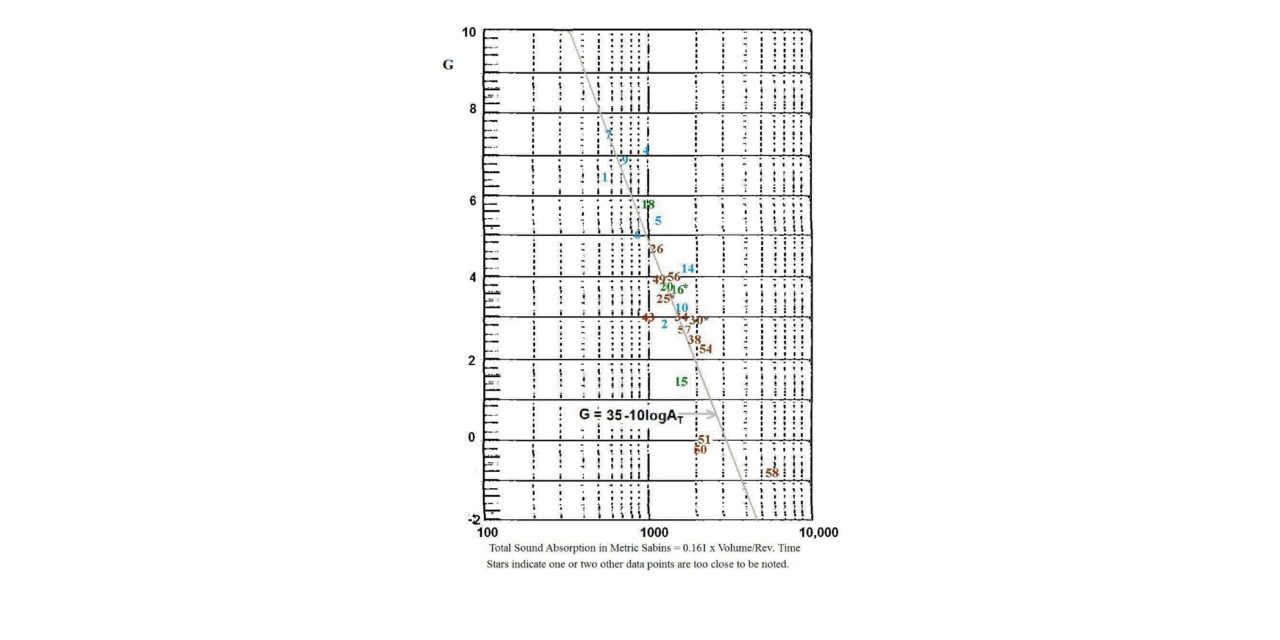 Comments on “G,” a measure of loudness, the efficiency of sound transmission from stage to audience in concert halls, an addition to the article on importance of the early-to-reverberant sound-energy ratio, “Clarity,” in speech and music acoustics, related to use of sound-reflecting panels with attention to data in Dr. Leo L. Beranek’s three concert-hall books.1

The referenced work did not consider “G,” and this article is an attempt to make up for that lack. It is restricted at this point to those halls included in the excellent to satisfactory tabulation on page 241 of Beranek’s last book for which “G” data was obtained.2 While this is a fraction of all the halls discussed in all three Beranek concert hall books, I believe there is enough information to provide answers to two questions: (1) Can “G” be predicted and on what physical parameter or parameters? (2) What are the limits on values for “G” for an excellent concert hall?

First, the available data as indicated in the introduction. Figure 1 is a scan of the list from page 241, with my adding the numbers in the order that Beranek assigned, as well as the room volume, mid-frequency reverberation time, and the total mid-frequency sound-absorption calculated from the Sabin equation:

The simple physics of energy conservation does suggest that “G” should be strongly related to the total sound-absorption.

The first group of halls, 1 – 19, Beranek lists in order of excellence from interviews. 20 – 39 are in alphabetical order as approximately the same in the reasonably good category. Those in the last group, 40-58, have problems with increasing severity.

Figure 1, Scan of the Page 241 Excellence List with Beranek’s Own Numbers Added

Figure 2, “G” as a function of total sound-absorption “AT“

Based on discussion in the book, the first 14 of the halls form the “Excellent” category and will used to determine the limiting values. The -3.0 value for G for hall 43 is clearly in error, based on the subjective hearing evaluation and simple physics. Removing the minus sign gives a sensible value of “G” and this is what is used in Figure 2, which shows “G” as a function of total sound-absorption

I did not include data for No. 22, “The Chicago Civic Center,” in Reference 1, the previous paper on this website. Data for it is available in the 1962 book only, not in the later books, and it is labeled “McCormick Place” there. It is an exceptionally large hall, and live acoustics were only considered for design of the movable orchestral stage enclosure, with sound transmission to the audience, for all events, via a sound system which was state-of-the-art in 1962, but may have been replaced, possibly more than once, since then, or maybe just upgraded with more advanced electronics and control. If musicians and critics like concerts there, all credit possible must go to its sound-system operators and those who maintain the system! If any reader can suggest why Dr. Beranek included it, please tell me! C. F. Murphy and Associates were architects, with BBN as acoustical consultants. Yes, I did work on the project and got to ride both the 20th Century Limited and the Broadway Limited as a perk.

Note that all data in both Figure 1 and Figure 2 are for empty halls. G is rarely measured in full halls. The limited data available suggests subtracting 1.0 – 1.5 for halls with modern comfortable seat upholstery and 2.0 – 2.5 for older halls with thin and limited seat upholstery to obtain G for full halls,

I thank David Conant, Ken Dickensheets, Chris Foreman, Mendel Kleiner and Marshall Long for valuable and timely suggestions and proofreading, and the students and teachers at my Yeshiva for their immense tolerance.

Fellow of the American Academy of Arts and Sciences (1952)

Wallace Clement Sabine Medal of the Acoustical Society of America (1961) for internationally recognized achievements in all phases of architectural acoustics, and his publications on acoustical measurements, and the world’s great concert halls.

Gold Medal from the Acoustical Society of America (1975) for leadership in developing, in the United States and abroad, the desire and the capability for achieving good acoustics in communications, workplaces, concert halls, and communities.

National Medal of Science in Engineering (2002)

Rayleigh Medal of the Institute of Acoustics, United Kingdom (2014).

15L. L. Beranek, Concert Halls and Opera Houses, Music Acoustics and Architecture, Academic Press., Springer-Verlag. New York, 2002. p.501-502 for audience sound-absorption. Note that all acoustical terms and abbreviations used by this author are well-defined in this book, which has an excellent index and a comprehensive reference list. Available from the Acoustical Society of America. Note on pages 50 and 626, Symphony Hall, Boston, volume is 18750m3, not 8750m3. Page 499. The first sentence of paragraph under “Shape” is self-contradictory. Tanglewood’s Shed’s success proves an excellent fan-shaped hall is possible. Also, there have been other excellent modern first-class halls, including the Pasadena Ambassador College Auditorium and the Northbridge Valley Performing Arts Center, both California, and Whelin Hall, Hamilton University, Clinton, NY. Page 500, the first sentence of the second paragraph is wrong. The Teatro Colon, Buenos Aries, Argentina, is excellent and horseshoe-opera-house-shaped, and the Berlin Hall, a surround hall, comes after it in the excellent class. Page 527. The last sentence of the second paragraph should be interpreted to mean a lack of early reflections rather than a long reverberation time per-se. This agrees with Beranek’s view of the Dallas hall, pages 75 and 79. The last sentence, third paragraph, page 527, is wrong and should be omitted. Figure 4.2, page 529, shows that Early Decay Time is closely correlated with Reverberation Time, 0.99, whereas Clarity is not at only 0-.84. Page 529, Table 4.2, the 0.88 correlation between Early Decay Time and Clarity, 0.88, should be shown boldface or the 0.84 above without boldface. Page 538, the last sentence of the second paragraph is wrong and should be removed. Again, Clarity can be shown to be reasonably independent. In perspective, compared to some 15,000 data points, suggestions, and details included in the last of the three books, these corrections are very few in number.

16L. L. Beranek, Concert and Opera Halls, How They Sound, Acoustical Society of America, Woodbury New York, 1996. There are halls not included in the previous or following books. Some of my few corrections noted for the above reference are not required for this book.

24D. L. Klepper, “First Presbyterian Church, Stamford, Connecticut,” J. Acoust. Soc. Am. 31, p. 879–882, 1959. Years of hindsight suggests the words “early sound energy” should have been used instead of “direct sound” throughout this paper.

26C. R. Boner, “Some Examples of Sound-System Correction of Acoustically Difficult Rooms, JAES, April, 1967, reprinted in Sound Reinforcement, AES Anthology, New York, 1978 p. B10-12. The first system discussed is an example. The others are distributed loudspeaker systems, but these are also designed to raise C50.

31J. P. A. Lochner and J. F. Burger, “The Influence of Reflections on Auditorium Acoustics,” Journal of Sound and Vibration, 1, p. 426- 1964. Some may still only consider reverberation time: D. Allcott, “Faith comes from Hearing,” Sound and Communications, Jan. 2012: The acoustics were judged in an all-hard empty church, and sound absorption was installed, possibly in greater quantity than the very best sound system would have required. Compare with A. Vargass, “With the Right Tools,” Sound and Communications., April 2015, p.22, 24-25, 102-103. Here an unusual sound system to meet existing room conditions was installed, and a conflict with the church musicians was avoided.

40Paul S. Veneklasen and Jerry P. Christoff, Seattle Opera House – Acoustical Design, The J. Acoust. Soc. Am. 36, p. 903, 1964. Note that this may be the first paper dealing with music acoustics spaces where the possibility of both clarity and reverberation is discussed in a hall where the concept is realized. However, missing completely is a discussion of the balance between the two effects. The impression is that while two seconds is the ideal reverberation time for symphonic music, clarity can be unlimited. The right balance in this hall was thus a matter of luck, the balance confirmed when I heard a symphony concert there with the acoustics approximating those of Jerusalem’s Binyanae HaOomah and typical Carnegie Hall seats for me at the time. Possibly the reverse may be proved, that reverberation time may be unlimited, but the correct balance with clarity is important, C80 of -1.0 to 1.0 in the occupied hall. The success of the Dallas Myerson Center concert hall, with 2.8 seconds RT and C80 of -0.7 occupied is a step in that direction.

41Reference 15, page 506, then 616. D. F. V. Keet, “The influence of early reflections on spatial impression,” 6th International Conference on Acoustics, Tokyo, 1968. T. Okana, L, L. Beranek, T. Hidaka, “Relations among internal cross-correlation coefficient, IACCE, lateral fraction, LFE, and apparent source width, ASW, in concert halls, Jour. Acoust. Soc, of Am. 104, p. 2398-2411, 1998; M. R. Schroeder, “Binaural dissimilarity and optimum ceilings for concert halls: more lateral diffusion,” J. Acoust. Soc. Am., 22, p. 958-963, 1963. These references will lead to others. The lateral fraction measurements are usually conducted both in the 0 – 80 millisecond and the post-80 millisecond time-frames. While it is the latter that provides enveloping reverberation, it is the earlier that both broadens source width and impresses the listener with closeness to the orchestra. If the design of the hall is satisfactory for the early sound arrival directions at the listener, it is almost impossible to design the hall that will at the same time not be satisfactory for the late arriving sound energy. Thus, Beranek chose BQI, which is based on the 0-80 millisecond energy, and which also has the advantage of minimum difference between full and empty occupancy.

45Yoichi Ando, Auditory and Visual Sensations, Springer, New York NY (2009). I have not referred to this book in the above text, but it is the only source of research results, in book form, that suggests why musicians and educated listeners have specific preferences for reverberation, Clarity, and other effects of the acoustical environment.